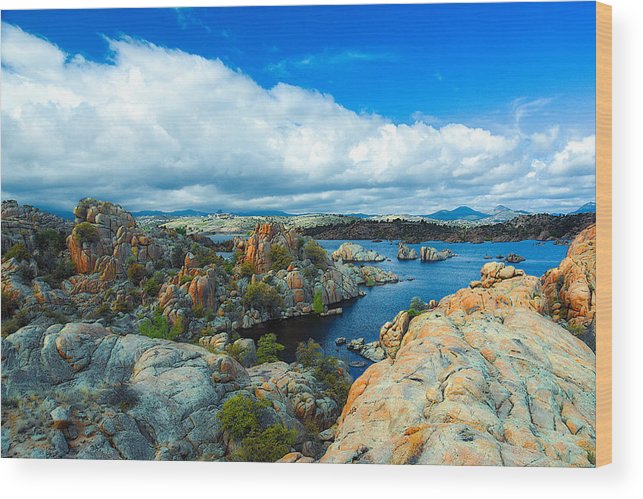 Prescott Rocks wood print by Richard Gehlbach.   Bring your artwork to life with the texture and added depth of a wood print. Your image gets printed directly onto a sheet of 3/4" thick maple wood. There are D-clips on the back of the print for mounting it to your wall using mounting hooks and nails (included).

I'm honored to be featured in Arizona Country HDR, thanks Thomas.

Thank you Thomas and Rebecca. A beautiful location where I could spend many more hours hiking and photographing, as you well know Thomas.

What a beautiful image Richard!! Congratulations on your feature. F/L

Beautifully shot and processed Richard. I live here in the area and never get tired of it;s beauty !!!!!! Tom

Driving in the area of Prescott, Arizona leads you past low rolling hills covered in green grass. The Prescott area contains farms, ranches, small communities, old mining claims, and a rich history of the wild West. After Arizona was designated a territory, the fledgling government was transferred in 1864 from Fort Whipple to its new designated capital in Prescott. The capital was changed a couple of times later and eventually landed for good in Phoenix, Arizona. Arizona became a state in 1912. There is an area near Prescott that seems out of place with the rest . It is a granite outcropping that juts out of the rolling hills and encompasses two lakes, outstanding hiking trails, and breath taking scenery. It is known as the Granite Dells. This is a great location to camp, hike, fish, and of course, photography. Prescott Rocks is just one of many I took on my last visit.