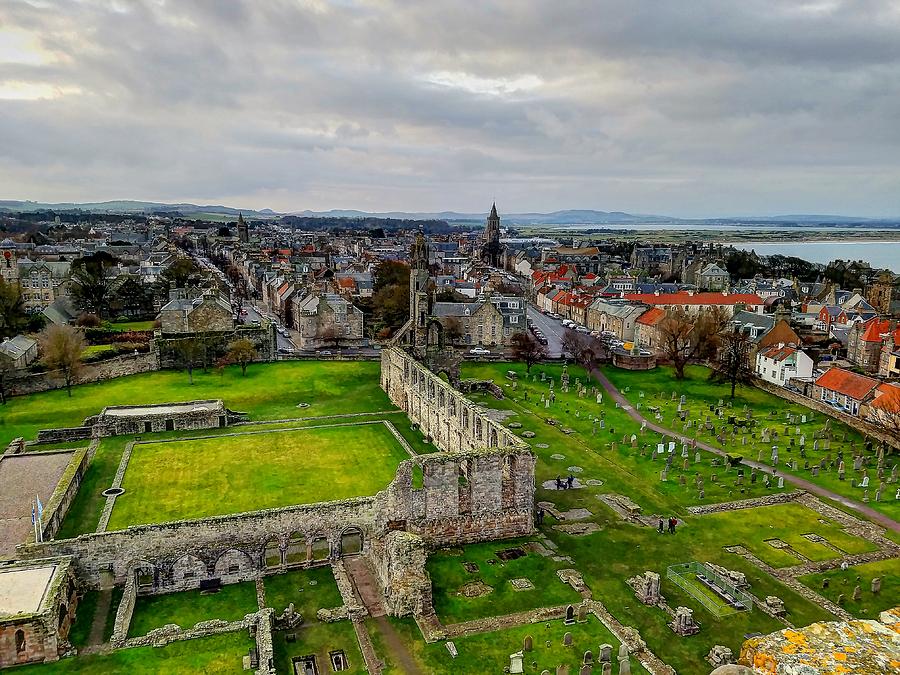 If you love history, like I do, you will enjoy visiting Scotland and more specifically St. Andrews, Scotland. This location is rife with history beginning with first inhabitants who settled on the estuary fringes of the rivers Tay and Eden during the Mesolithic (middle stone age) Period. They came from the plains in Northern Europe between 10,000 and 5,000 BC. This was followed by the nomadic people who settled around the modern town around 4,500 BC. They were farmers clearing the area of woodland and building monuments.

In the mid-eighth century the Pictish King Oengus established a monastery. This monastery was traditionally associated with the relics of Saint Andrew. These relics consisted of a number of bones supposed to be the Saint’s arm, kneecap, three fingers and a tooth believed to have been brought to the town by St. Regulus.

In AD 877, King Causantin mac Cinaeda (Constantine I or II) built a new church for the Culdees at St. Andrews and later the same year was captured and executed (or perhaps killed in battle) after defending against Viking raiders. In AD 906, the town became the seat of the bishop of Alba, with the boundaries of the seat being extended to include land between the River Forth and River Tweed. In 940 Constantine III abdicated and took the position of abbot of the monastery of St. Andrews.

There is much more histories to St. Andrew but suffice it to say it has long played an important part in Scottish ecclesiastical history. It is a fact that is evident from the wealth of churches and monuments in the city. The Cathedral (in the foreground of this photograph) was 335 ft in length and 160 ft wide. It was built between 1160 and 1328, was once the largest church in Scotland and boasted such illustrious guests as Robert I and James V. The cathedral's stonework was plundered in 1559 and now only parts of the late Romanesque east front, a section of the west front, the southern side aisle and a gatehouse remain.