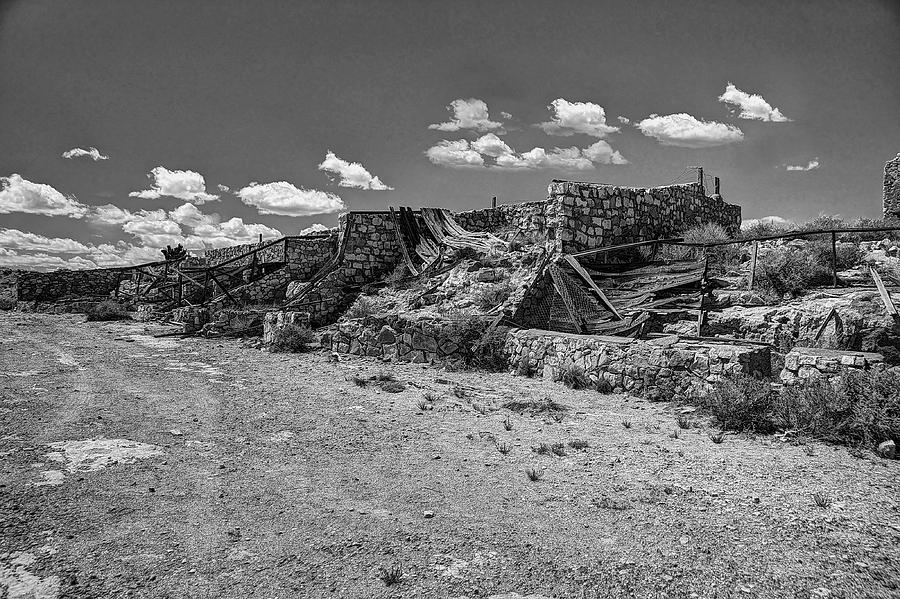 There are many ghost towns in the western United States and a number of them were filled with colorful characters. Two Guns, Arizona was no different. The photograph shown here is one of the many buildings still standing in various stages of decay. There is a lot of information written about Two Guns on the Internet so I am going to condense the history here.

Two Guns is located at the edge of Canyon Diablo (Devil’s Canyon) in Northern Arizona. Prior to the creation of the town, Native Americans occupied the area and have done so since 1050 AD. They were most abundant during the years of 1050-1300. The soil in the area was comprised of decomposing volcanic debris that was rich in minerals and good for farming. The area also had lush grass for animals to graze.

Canyon Diablo’s name is believed to have originated with the Spaniards who came to the area in 1540. The first contingent led by Don Garcia De Cardenas was part of Coronado’s expedition from New Mexico. Cárdenas was tasked with locating Hopi’s that were reportedly living in a magnificent canyon. Canyon Diablo was not that canyon but it was an obstacle to cross, which could be accomplished at a narrow point where Two Guns would eventually make its appearance.

As we all know from history, the Spanish had many goals they were trying to achieve. Convert the Native Americans to Catholicism; explore the western United States for the Spanish government, and most of all locate the gold, silver, and other riches to be returned to Spain. They were very effective at accomplishing their goals even though the Native Americans rebelled in 1680 and ran the Spaniards out. The Spanish troops returned 12 years later and re-conquered the Missions and other possessions.

From the mid to late 1800s several United States Calvary expeditions arrived in the same area that would be known as Two Guns. Each had their own task, which ranged from topographical mapping, creating routes of passage for settlers, and mapping future railroad routes. Many landmarks in Arizona are named after the officers who led these expeditions. One of the most unusual occurred in September of 1857 when Lt. Beales expedition arrived with camels they were using to carry the supplies. Since Arizona was an arid environment, why not use camels. The experiment eventually disappeared with the arrival of the Civil War. Some of the stray camels were seen roaming the southwest deserts as late as 1929. Something common among these expeditions was the recognition that the future site of Two Guns was the best location to traverse Canyon Diablo.

During this same period, Native Americans still occupied and lived in the area. The Navajos and Apaches had ongoing skirmishes. In 1878 a raiding Apache party attacked and nearly wiped out two Navajo villages. Twenty-five Navajo warriors tracked the Apaches and at the future site of Two Guns, the scouts felt warm air rising from a crack in the ground at the edge of Diablo Canyon. Under this crack was a cave where 40 Apaches were hiding with their horses. Two Apaches came out of the cave opening and were immediately killed. The Navajos stacked wood, brush and other fuel at the cave entrance and lit it on fire. Then they yelled into the cave demanding that three young girls taken by the Apaches be released. They were met with silence and the Navajos knew the girls were dead, so they stacked more fuel on the fire trapping and killing all the occupants of the cave.

Near the turn of the century (1900) a shortcut to Winslow, Arizona was created. It traversed Diablo Canyon at the site of this cave (and future Two Guns). In 1920 Earl and Louise Cundiff opened a trading post, campground, and rental cottages near the road to provide services for the weary travelers. A concrete bridge was built spanning Diablo Canyon and it became known as the National Trail Highway. This would later become known as Route 66.

A man arrived calling himself Henry “Indian” Miller who claimed he was an Apache Chief named Crazy Thunder. In reality he was neither an Apache nor a Chief, but he was part Mohawk. He and his wife partnered up with the Cundiff’s. Henry built a long stone building north of the canyon naming it Fort Two Guns. The Cundiff’s proposed that the community be called Two Guns but the post office rejected that name opting for Canyon Lodge instead. This moniker has faded from history while the name Two Guns remains today.

Henry Miller expanded Fort Two Guns into an exhibit where he would lure travelers off Route 66 to make money. He would offer tours to the “Mystery Cave” aka “Apache Death Cave”, a small zoo where he housed mountain lions, snakes, porcupines, bobcats, as well as selling the customers refreshments and bones of the warriors killed in the cave. Two Guns was prospering.

At the same time the Cundiff’s sold their store to a drifter who eventually snuck away during the night with all the merchandise. Then Mr. Cundiff began arguing with Henry Miller over the terms of their contract. On March 3, 1926, Miller shot Cundiff dead. Miller was, for unknown reasons, quickly acquitted. Henry Miller returned to Two Guns where he was nearly killed by one of his captive Mountain Lions, then later almost killed by one of his captive Lynx. He left Two Guns for good after his daughter was killed in a traffic accident.

In 1938 Route 66 was rerouted to the south. Mrs. Cundiff remarried and with her new husband they rebuilt and reopened Two Guns, including the zoo. However, the prosperity did not last long and by 1950 everything was closed. In 1971 just as Interstate 40 was opening right next to Two Guns, the complex burnt down.

Two Guns sits quietly today on the south side of Interstate 40, thirty miles East of Flagstaff, Arizona. This photo is what remains of the zoo at Two Guns, Arizona.