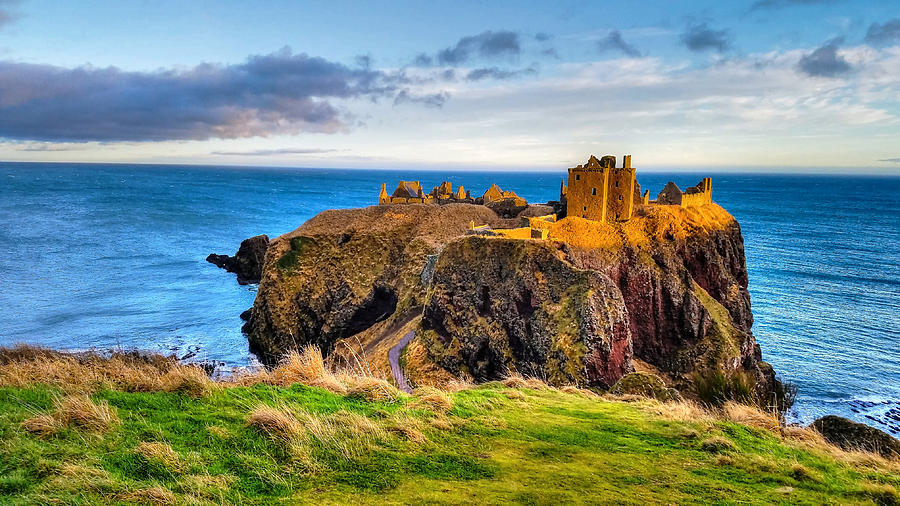 Dunnottar Castle (Scottish Gaelic: Dun Fhoithearis meaning �fort on the shelved slope� is a ruined medieval fortress located upon a rocky headland on the northeast coast of Scotland, about 3 kilometers (1.9 mi) south of Stonehaven. The surviving buildings are largely of the 15th and 16th centuries, however, the site may have been fortified in the Early Middle Ages. Possibly the earliest written reference to the site is found in the Annals of Ulster which record two sieges of "D�n Foither" in 681 and 694. The earlier event in 681 was an attack by Brude, the Pictish king of Fortriu, to extend his power over the northeast coast of Scotland.

Because it was fortified and in a strategic location, Dunnottar played a prominent role in Scottish history through the 18th-century Jacobite uprisings. It was the property of the Keiths from the 14th century, and the seat of the Earl Marischal. Dunnottar declined after the last Earl forfeited his titles by taking part in the Jacobite rebellion in 1715, which failed. It was common in those days that winners were rewarded with land and sometimes castles while those on the losing side was stripped of land/castles.

Dunnottar is best known as the place where the �Honours of Scotland�, the Scottish crown jewels, were hidden from Oliver Cromwell�s invading army in the 17th century. Most castles change hands several times over the years, whether seized as spoils of conflicts or sold. They often fall into disrepair or there materials are removed to build structures in other locations. Both are true with Dunnottar Castle. The castle was restored in the 20th century and is now open to the public.