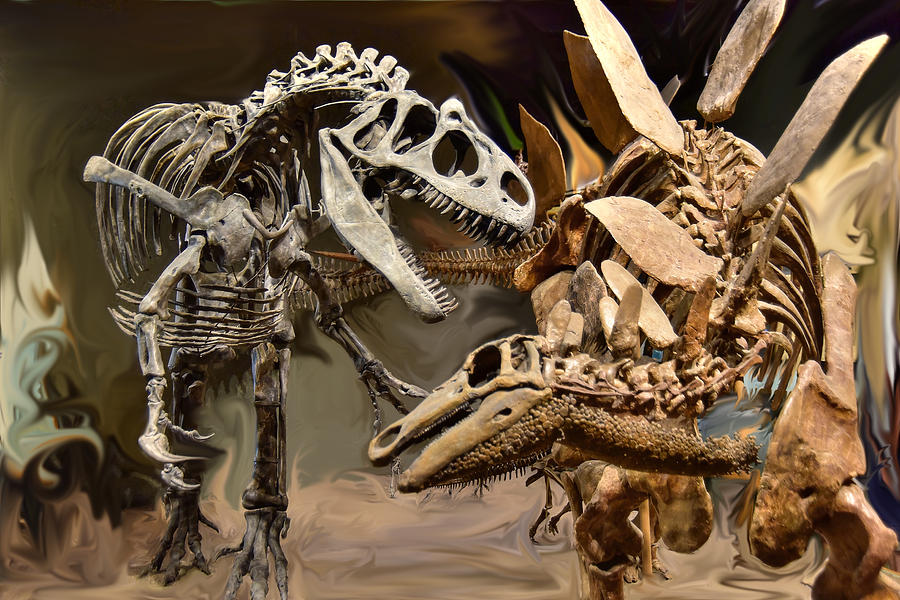 Stegosaurus (Greek for "Lizard Foot�) is the dinosaur on the right that lived approximately 155 to 150 million years ago during the late Jurassic Period. Tyrannosaurus Rex (Greek for �King of the Tyrant Lizards�) lived during the upper Cretaceous Period, 67 to 65 million years ago. Therefore, T-Rex would not make an appearance on the stage for another 83+ million years.

Let us examine the characters in this photograph. Stegosaurus remains have been discovered on virtually every continent. One reason may be that they were roaming the Earth during the period when the super continent (Pangaea) was still splitting apart. Pangaea separated in three phases that began approximately 175 million years ago and ended about 90 million years ago. During that slow process there were land bridges still connecting some continents that were used by migrating animals.

Stegosaurus was a plant-eating animal (Herbivore) that reportedly preferred shoreline or marshy areas when possible. Stegosaurs were gregarious animals (lived in herds) that reproduced, like most dinosaurs, by laying eggs. They could grow up to 29 feet and weigh 4000 Lbs. They could only travel at an estimated 5 MPH due to their size and weight. They had plates that helped with temperature regulation as well as display and they had a strong tail with spikes for defense.

Ceratosaurus was a carnivore that could achieve a length of 22 feet and weigh 2100 Lbs. Evidence gathered indicated it had a crocodilian tail, which suggested it may have been a good swimmer. Like Stegosaurus, it seems Ceratosaurus may have preferred coastal or marshy environments. Although outweighed by Stegosaurus, Ceratosaurus was well equipped with better speed, mobility, and powerful ripping tools to do the job.

The actual predator in this photograph is Allosaurus. The horns over the eye sockets are just one indicator of the specie in this photo. Allosaurus could reach a length of 39 feet and weigh up to 4,400 Lbs. It was agile and studies indicate it could reach a speed of 21 MPH. Allosaurus preferred the plains instead of marsh and coastal locations. That worked well for Ceratosaurus since he was half the size of Allosaurus and it seems there were plenty of Stagosaurs to go around. Allosaurus was the more prevalent predator on the Morrison Formation and top of the food chain at that time.