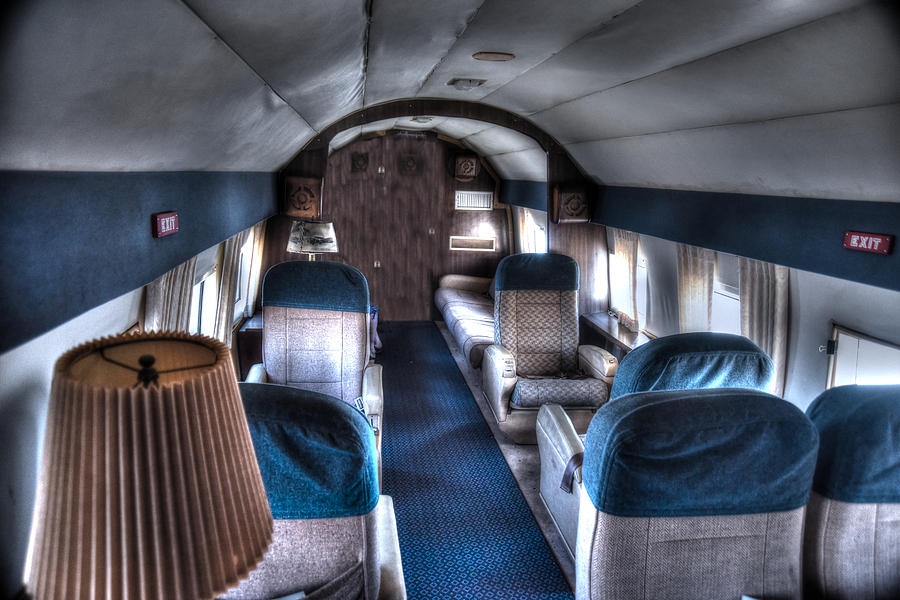 So you are looking at this picture, which is a photograph depicting the interior of a plane designed to carry passengers. However, something is seriously wrong. You can’t quite determine what it is and it’s driving you nuts. Let me help you with this issue. It is called “wide seats” and “leg room”. Sure, you thought those were just myths like Loc-Ness and Big Foot. Nope, they both actually did exist in the past and still do today, although most of us will never experience them.

This photograph is the interior of a Beechcraft Model 18 (also known as a “Twin Beech”). It is a six to 11-seat, twin-engine, low-wing, tail wheel light aircraft manufactured by the Beech Aircraft Corporation of Wichita, Kansas. Continuously produced from 1937 to November 1969 (over 32 years, the world record at the time), over 9,000 were manufactured, making it one of the world's most widely used light aircraft.

Production got an early boost when Nationalist China paid the company US $750,000 for six M18R light bombers, but by the time of the U.S. entry into World War II, only 39 Model 18s had been sold, of which 29 were for civilian customers. Work began in earnest on a variant specifically for training military pilots, bombardiers, and navigators. During and after World War II, over 4,500 Beech 18s saw military service as light transport, light bomber (for China), aircrew trainer (for bombing, navigation and gunnery), photoreconnaissance, and "mother ship" for target drones. Some of the military designators included United States Army Air Force (USAAF) C-45 Expeditor, AT-7 Navigator, AT-11 Kansan; and United States Navy (USN) UC-45J Navigator, SNB-1 Kansan. In World War II, over 90% of USAAF bombardiers and navigators trained in these aircraft.

From 1951 to 1955, the USAF had many of its aircraft remanufactured with new fuselages, wing center sections, and undercarriages to take advantage of the improvements to the civil models since the end of World War II. Eventually, 900 aircraft were remanufactured to be similar to the then-current Model D18S and given new designations, constructor's numbers and Air Force serial numbers. The USN had many of its surviving aircraft remanufactured as well, these being re-designated as SNB-5s and SNB-5Ps. The C-45 flew in USAF service until 1963, the USN retired its last SNB in 1972, while the U.S. Army flew its C-45s until 1976. In later years, the military called these aircraft "bug smashers" in reference to their extensive use supplying mandatory flight hours for desk-bound aviators in the Pentagon. Beech 18s were used extensively by Air America during the Vietnam War. Some were redesigned to increase cargo weight and power, with a few converted to turbo prop power plants.

The Model 18 was sold worldwide as a civilian executive, utility, cargo aircraft, and passenger airliner on tail wheels, nose wheels, skis or floats. In the early postwar era, the Beech 18 was the pre-eminent "business aircraft" (configuration shown in this photograph) and "feeder airliner." Besides carrying passengers, its civilian uses have included aerial spraying, cloud seeding, firefighting, sterile insect release, sky diving, fish seeding, air mail delivery, ambulance service, numerous movie productions, freight, weapon- and drug-smuggling, engine test bed, skywriting, banner towing, and stunt aircraft. As you can see, it was a very versatile aircraft. Many are now privately owned, around the world, with over 300 in the U.S. still on the FAA Aircraft Registry as of December 2014.

A fascinating insight into the past!

Congrats! Your artwork has been featured on the homepage of the Aviation Group! L/F