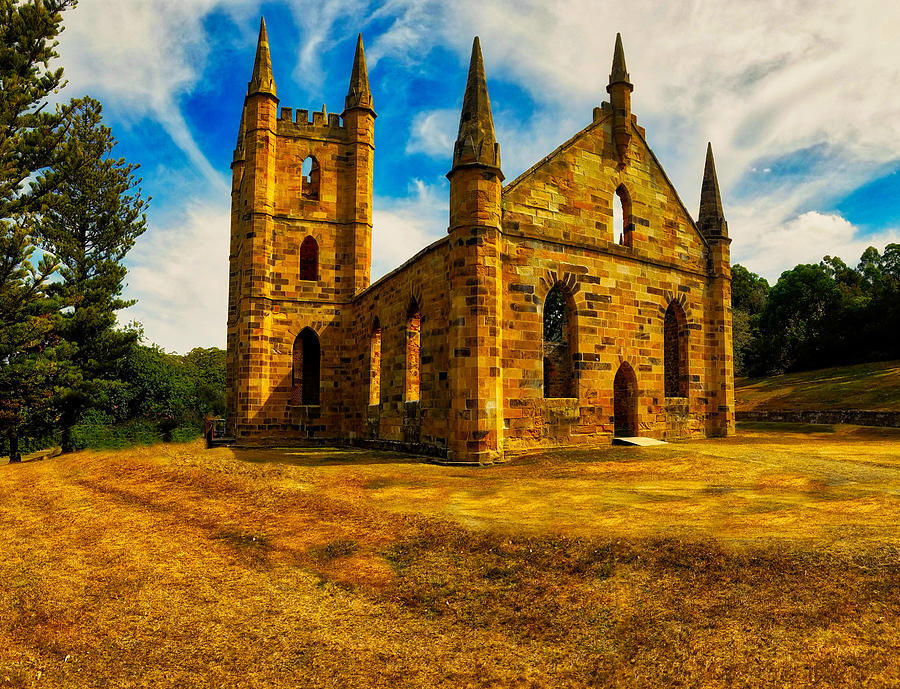 Port Arthur was named after George Arthur, the Lieutenant Governor of Van Diemen’s Land. The settlement started as a timber station in 1830, but it is best known for being a penal colony.

From 1833 until 1853, it was the destination for the hardest of convicted British criminals, those who were secondary offenders having re-offended after their arrival in Australia. Rebellious personalities from other convict stations were also sent there. In addition Port Arthur had some of the strictest security measures of the British penal system.

The prison was completed in 1853 but then extended in 1855. The layout of the prison was fairly symmetrical. It was a cross shape with exercise yards at each corner. The prisoner wings were each connected to the surveillance core of the Prison as well as the Chapel, in the Centre Hall. From this surveillance hub each wing could be clearly seen, although individual cells could not.

The Separate Prison System also signaled a shift from physical punishment to psychological punishment. It was thought that the hard corporal punishment, such as whippings, used in other penal stations only served to harden criminals, and did nothing to turn them from their immoral ways. For example, food was used to reward well-behaved prisoners and as punishment for troublemakers. As a reward, a prisoner could receive larger amounts of food or even luxury items such as tea, sugar and tobacco. As punishment, the prisoners would receive the bare minimum of bread and water. Under this system of punishment the "Silent System" was implemented in the building. Here prisoners were hooded and made to stay silent. This was supposed to allow time for the prisoner to reflect upon the actions, which had brought him there. Many of the prisoners in this Separate Prison developed mental illness from the lack of light and sound. This was an unintended outcome although the asylum was built right next to the Separate Prison. In many ways Port Arthur was the model for many of the penal reform movement, despite shipping, housing and slave-labor use of convicts being as harsh, or worse, than others stations around the nation.

The peninsula on which Port Arthur is located is a naturally secure site since it is surrounded by water. The administration also advertised that said waters were shark infested, although that was not entirely accurate. The 100-foot wide Isthmus of Eaglehawk, that was the only connection to the mainland, was fenced and guarded by soldiers, man traps, and half-starved dogs.

Contact between visiting seaman and prisoners were barred. Ships had to check in their sails and oars upon landing to prevent any escapes. However, many attempts were made, and some were successful. Boats were seized and rowed or sailed long distances to freedom.

In 1836, a tramway was established between Taranna and a jetty in Long Bay, north of Port Arthur. The sole propulsion was convicts. One of the last remaining sections of the tramway can be viewed at the Federation Chocolate Factory at Taranna. Smooth Island in Norfolk Bay was most likely used to grow fresh vegetables for the Port Arthur penal settlement.

Port Arthur was advertised as an inescapable prison, much like the later Alcatraz in the United States. Some prisoners were not discouraged by this, and tried to escape. Martin Cash successfully escaped along with two others. One of the most infamous incidents, simply for its bizarreness, was the escape attempt of one George "Billy" Hunt. Hunt disguised himself using a kangaroo hide and tried to flee across the Isthmus of Eaglehawk, but the half-starved guards on duty tried to shoot him to supplement their meager rations. When he noticed them sighting him up, Hunt threw off his disguise and surrendered, receiving 150 lashes.

Port Arthur was also the destination for juvenile convicts, receiving many boys, some as young as nine. The boys were separated from the main convict population and kept on Point Puer, the British Empire's second boys' prison. Like the adults, the boys were used in hard labor such as stone cutting and construction. One of the buildings constructed was one of Australia's first non-denominational churches built in the Gothic Style. Attendance of the weekly Sunday service was compulsory for the prison population. Critics of the new system noted that this and other measures seemed to have negligible impact on reformation.

There were many women at the prison, some prisoners themselves, some married to staff, and others hired workers. Children were present in large numbers, again some related to staff and others prisoners. As an example one boy was there for stealing food in England. Since it was his second offense, he was shipped to Port Arthurs prison. The boys were initially housed with the hardened adult criminals, but eventually a boys prison, Point Puer, was constructed nearby where they were taught skills to assist them when released. Point Puer was reported to be a wrenched place and many children dies trying to escape or committed suicide.

Despite its reputation as a pioneering institution for the new, enlightened view of imprisonment, Port Arthur was still in reality as harsh and brutal as other penal settlements. Some critics might even suggest that its use of psychological punishment, compounded with no hope of escape, made it one of the worst. Some tales suggest that prisoners committed murder, (an offence punishable by death) just to escape the desolation of life at the camp. The Island of the Dead was the destination for all who died inside the prison camps. Of the 1646 graves recorded to exist there, only 180, those of prison staff and military personnel, are marked. The prison closed in 1877.